Michael Guy is a consultant in the field of Cyber Security & Technology Innovation.

Michael Guy is the CEO of the ISM group of companies. The ISM group owns and operates companies that focus on core competencies such as search engineering, content delivery networks, anti-piracy, web application design and music production.

Michael Guy began his career as a musician writing songs for other artists and had a successful career as a musician for MTV groups such as House of Lords, Shark Island, Hurricane and others. As a songwriter Michael wrote songs with legendary songwriter Richard Berry who wrote “Louie Louie”. Richard Berry signed Michael to his first songwriting contract. In 1992, Michael was later signed by Zomba Music Group by Neil Portnow who later became the President of The Grammys. Michael collaborated with many other artists such as Ronnie James DIO on “There’s a River Between Us”.

Technology and the fall of Napster

Michael designed the worlds first Anti Piracy System, the first Peer 2 Peer tracking system, and the first Napster tracking network. Guy was concerned about the demise of the music industry after downloading and beta testing the now infamous Napster application. Napster was a centralized P2P network which was social in nature and allowed users to download unauthorized digital copies of songs but the Napster network also allowed users to openly trade play lists. A play list was a complete accounting of the stolen music on the users hard drive at a given time. While the industry argued who would own Michael’s ideas, it was the artists who paid the ultimate price.

Guy called in his team and a working beta was constructed in a matter of days. Michael started a second company to put an end to the theft of music. During this time, Michael provided data to Billboard Magazine, Michael advised provided system data to the RIAA which led to Michael acting as consultant on the 17 billion dollar Napster litigation.

Michael continued strategic web structure design and deployment of limited AI systems, web applications, security solutions as well as anti-piracy solutions for the music and film industries. Michael was pursuing a degree in Computer Science at Harvard University before outranking them for “business course” on the web, but was making more than the entire CS faculty and that pursuit was dropped.

Michael has acted as expert consultant on several high profile civil cases involving online piracy. Michael began his career in anti-piracy by designing the worlds first anti-piracy system. After a long break from 18 years of working in the field of music technology, Michael decided to design a new breed of anti piracy system based on inspiration from living legends in the field of mathematics. Michael designed N.S.A.A.S, which is a group of anti piracy systems that Michael designed to track, analyze, and issue DMCA take-downs for websites that infringe on the copyrights or other intellectual property of the creators of hard goods as well as digital works.

Michael is a multi vertical problem solver, innovator, and security consultant. In a recent interview with Wired Magazine Michael stated: “When people tell me I am ahead of my time, I take that as a compliment.”

Guy continues to innovate in the fields of object oriented programming, search engineering and web/network based systems and development of other systems with the onus placed on making a better future. 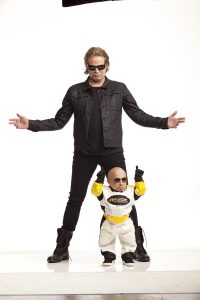